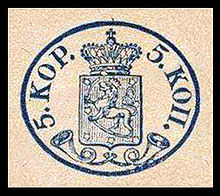 The classic stamps of Finland are unlike any of the other stamps of Europe. The first issues are very simple in design and have a crudeness that is only matched by the Cotton Reels of British Guiana or Indian Native States. The second issues are stamps picturing the Finnish Coat of Arms and have the most interesting roulettes of any philatelic issues ever. Roulettes are cuts in the paper to facilitate stamp separating and are used instead of perforations. The technology never caught on because it was hard to keep the cutting knives sharp and the rouletting process made it difficult to separate the stamps without tearing them. The Finnish roultettes are among the most striking with deep circular ridges and are collected by the depth and gauge of the roulette which is something that is done on no other philatelic issues. Finland has always had a small population and until the 1950's the economy was largely agrarian. Since then, Finland has industrialized rapidly and today has one of the most thriving high tech economies in the world along with one of the highest standards of living. But what it doesn't have is high stamp prices. On a rarity basis, Finnish stamps are modestly priced and if the economic gains continue and Finns begin to collect with anything like the passion of other Europeans, Finnish stamps should be in for substantial gains.