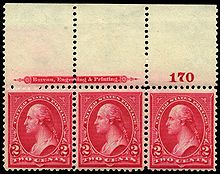 One of the most interesting aspects of US philately over the last twenty years has been the number of unusual collecting varieties that are issued as part of the ordinary postal issues of the Bureau of Engraving and Printing. Modern technology seems to produce more printing varieties rather than fewer and in the future many of these varieties could turn out to be very rare. Compare two regular issue first class postage rate stamps- the 37c regular issue stamp of 2002 to the 6c regular issue stamp of 1970. There are over 100 listed varieties of the 2002 issue in the Scott specialized compared to only about 20 of the 6c stamp. And specialists identify many more varieties than these. What traditionally happens in philately is that at the onset only a few collectors search out newer varieties. Look at early plate blocks. Plate Block collectors in the 1920's were looked at as kind of nutty but over the years their prescience paid off. It is impossible to predict that the thousands of varieties that have appeared on modern US issues will turn out to be as collectible as plate blocks. Phosphor and luminescence stamp which began to appear in the 1970's have never really caught on, probably because few collectors really want to look at their stamps in the dark. But I think modern US specialized varieties have a decent shot at widespread popularity in the future. They are inexpensive and they are scarce and they offer a US subspecialty that is more search driven than capital intensive.