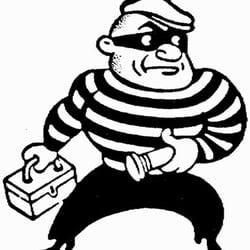 Robberies of stamp collections used to be a real problem. In the 1970's a large ring of stamp thieves were caught. They had an APS membership directory with them that they were using to figure out who to knock off next. When I was on the Board of Directors of the APS in the early 1980s, my home was burglarized, as were the homes of several other board members. But, stamp thefts have decreased in recent years and usually when philatelic materials are stolen it is part of a general burglary and not stamp specific. Insurance rates for stamps have dropped dramatically in real terms over the last thirty years. The reasons for the decrease in stamp theft are three. First, stamp prices have declined relative to the value of most other things. A mint US #C18 sold for $200 in 1980. It sells for $40 today and at the price levels for most stamp collections the risk of stealing them is not worth the reward. (Crooks are among the most rational economists around). Second, stamps are hard to fence. The number of dealers has declined and most are pretty honest so it is very hard to find anyone to buy stolen stamps. Years ago we had a couple of cartons of stamps worth about $10,000 stolen from our office. After a couple of weeks of fruitlessly trying to fence the stamps, we got a call from the crooks offering to sell the stamps back to us (We called the police and tried to set up a sting-quite dramatic in a philatelic way- but the guys never showed up). And third, the Internet and the ubiquity of scanning has made theft (and later resale) very difficult. Once an item has been scanned as a part of our inventory, it can easily be identified. When it is sold to you, we have a record and if it and if it is stolen there is a permanent record of your ownership of the stamp. So at this Christmas time, if you keep a list (admittedly short) of things in the world that are getting better rather than worse, you have the fact that your philatelic property is safer than ever before to add to that list.